Attention! The visitor of the blog could fall away from his supposed knowledge and beliefs! Read and watch at your own risk!

The ClimateControl scam began after the warming phase in the 1940, followed by a cooling phase with the start of the new warming phase.

As it was easy to predict that it would become warmer the scam masters decided to surf on the natural climate change. They hoped to legalize the global application of ClimateControl and claim the natural cooling phase since the 2000s as the success of their global poisoning of the skies, because SRM with TAI (Tropospheric Aerosol Injection) began globally in the 1990s.
Old statistics and research results about much warmer phases were all manipulated to blame the "human made global warming" on the beginning of the industrial development since 1850.

The global influence on the tropospheric wind-water streams began already in the 1960s with the buildup of the global network of main HAARP sites. The one making or/and intensifying the extreme El-Nino/La-Nina effects was build in Peru. 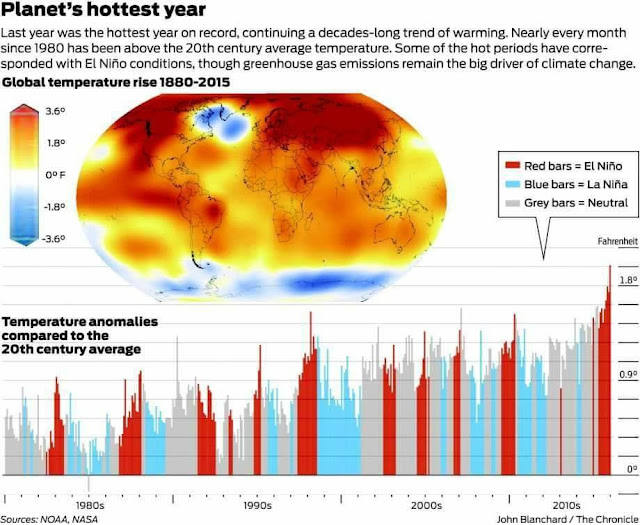 The surfing on the climate cycles with the claim about warming has already failed, also all the other predictions about rising oceans, melting glaciers and poles. However, the scammers cannot stop claiming that it is "warming", because they were not able to legalize the global ClimateControl in time. Therefore they are desperate enough to claim that also cooling was warming! :-)

Obviously the house of cards is falling apart!

Main reason for Tropospheric Water Grabbing (TWG) is the delivery of water for fracking of petrol and gas and industrial farming in desert regions of the world.

Also the Paris Climate Agreement doesn't guarantee the full legalization. The most important country which has to be submitted to the agenda is Russia, because Russia is the richest on water reserves. Russia is able to break the global wind-water management to protect its own sovereign and economic interest. With this ability Russia is already breaking the global Geoengineering-Agenda on all fronts.

The inevitable failure of ClimateControl scam would be an existential threat for the Bankster Pervert Empire of Deception (BPED). The finance bubble now depends on the full roll out of global climate control. Therefore all military, economic, political, medial, deception, targeted killing options will be used to conquer Russia!

Under current conditions this "dream" cannot be fulfilled, as Russia cannot be isolated and is able to counter any attack. Russia owns and is already using the same geophysical warfare to protect itself and its allies. Most media lies doesn't have any effect on Russia and every new lie strengthens the trust in Russian leadership for a world without BPED! 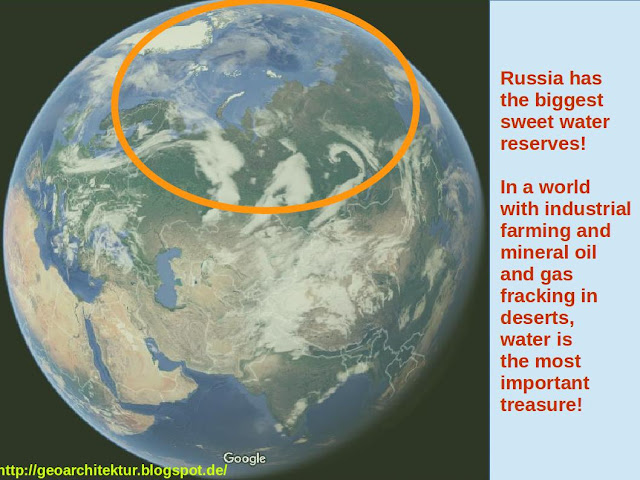 In addition to its water reserves, Siberia with its harsh climate is a natural methane collector. Russia's gas reserves will never end.

However, the main obstacle on their way remains Russia, controlling the biggest sweet water reserves of the globe! Therefore from the perspective of global empire an attack on Russia is inevitable. The endless wars in Greater Middle East, the threatening of Iran, the economic sanctions against Russia are designed to weaken, contain and prepare Russia for an full attack.

Global Blitzkrieg: West's Terror Battalions Eye Russia Next
http://landdestroyer.blogspot.de/2012/08/global-blitzkrieg-wests-terror.html
"With the US openly supporting, arming, and literally "cheering" for Al Qaeda in Syria, it should be no surprise that their support for Al Qaeda's other operations is now slowly revealing itself. For decades, brutal terrorist campaigns have been carried out in Russia by Al Qaeda's Caucasus Mountains faction, constituting the backbone of the so-called "Chechen rebels.""

It is not just a speculation, look at the fracking, desert farming, finance, energy, military industries. All are now depending on the expansion and full implementation of global Tropospheric Water Grabbing (TWG). It is already a multi trillion Dollar finance bubble business! 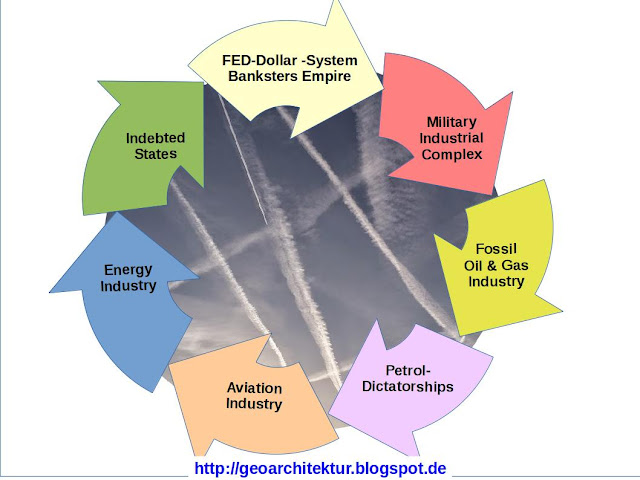 They are applying ClimateControl since decades and have intensified their efforts after the downfall of Soviet Union in 1991, particularly since 2001/2002. Some may see a connection with 9/11 here! The "War on Terror" enabled the empire to reach into regions, which would have not been possible without it.

The global legalization of ClimateControl, prepared by Climate Agreements did not work for them in time, so they have "intensified" their efforts and got most countries to sign the Paris Climate Agreement of 2016. The resolution in Paris was psychologically "supported" by an "terror act" - remind again "War on Terror"!

However, they have to legalize, fully roll out and intensify ClimateControl. Without that the whole imperial bubble, consisting of banksters, gangsters, fake media, fake science, fake politics, fake religion and fake moral will implode, explode, break down and disappear in a disaster.

Even Donald Trump cannot resists this pressure, because USA is fully under the control of the global empire and the empire will sacrifice the USA first, if it resists to obey the imperial orders. All the so called "energy security" is build in the success of TWG for global fracking colonialism and industrial desert farming!

So please dear readers, don't restrict Your perspective only on "we are poisoned by chemtrails". Chemtrails are the easiest observable sign of ClimateControl and TWG, they are poisonous, they reduce sunlight, cause VitaminD deficiency, cause reduction of photosynthesis, reduce the level of oxygen in the oceans and in air and cause global mass death of fauna and flora by suffocation! All that is true, but it is also the reason of global wars and rise of global Corporatism/Fascism/Oligarchy/Feodalism.

All that is explained in the blog. Please start with reading articles delivering basic knowledge of meteorology, nephology, water physics for ClimateControl.

ClimateControl was officially started in 1960 with a CIA Memorandum!

A geophysical attack may look like a "natural storm" but the difference is so clear as to differ a natural meadow from a corn field. The use of technical storms has commercial and military targets. The attack may occur anywhere as the multicopter-jet-machines can fly anywhere on Earth.
Not UFO! Climate Geoengineering vehicles for desalination by thermally geoengineered lower tropospheric Centrifuges (waterspout, tornado, storm)!
http://geoarchitektur.blogspot.com/p/waterspout.html

The short time window, where the treasures of Siberia and all the airspace of northern hemisphere could be conquered, was when Soviet Union broke apart up to the end of the presidency of Boris Jelzin.


Wladimir Putin should have been the last ruler of Russia. But Wlad AbuAli Putin joined the power of all Russian people, starting with Dagestan and Chechenia and together they kicked out and annihilated the imperial mercenaries tagged as Islamists.

The next window of opportunity may come in 100 or more years.

Russia cannot be defeated when it is attacked. It can only break apart from inside.

He had to become a great leader, because only great leaders can guarantee the existence of Russia. This story of great leaders of the steppes is based on the old federal and solidary organization proved to be successful since the revenge against the Goths under the leadership of the Huns, which were followed by the Avars, Kievian Rus and Moscovits and all melted into Russian Federation of our days.

Among the great leaders of Russia, Wlad AbuAli Putin is walking on the footprints of Ivan the Great, Peter the Great, Elizabeth the Great, Katharina the Great, Stalin the Great! Some of these were cruel in times of deadly wars.

Looking back in history Wlad AbuAli Putin may arise as the greatest among all these leaders, as he came again by the will of the people!

Maybe offering him the presidency was the only good decision Boris Jelzin ever made. We should all be aware, that Putin rejected the first offer and accepted when Jelzin asked second time.

Imperial complex is preparing a big war against Russia!
It has no other choice for survival, but it will lose!
Russia is more than prepared for any enemy attack!

You can always take Your own offline version with all articles and notes by applying the following command on Linux/Unix systems. Wget is also available for Windows and other operating systems.

"modhtml.sh": Bash script to make the html-pages link to each other offline after wget-ting the blog. It has to be executed within the downloaded directory.