Because of some tweet exchanges, a person naming himself @intrepidwanders sent me following link for an explanation of contrails and chemtrails and trying to "prove" that the last ones don't exist!

The whole text is a piece of propaganda worth to study and understand how propaganda works, using some facts and TRUTHS and MIXING them with LIES to create a modified reality by reckoning with the dumbness, the mental laziness and lack of knowledge and  information at the side of the reader.

Wakeup, don't become a victim.
Learn the real facts from real scientists!
Don't be fooled.
Don't be programmed to dupe Yourself!
Understand the fraud and learn who are the swindlers!
See what is stolen from You by a elusive #conveyerbelt!

We are moving in an area of natural and artificial cloud formations.
The basic principles for both are the same!
It is not easy to discern without knowledge about meteorology!
The structure, impact and intention make the difference.

Let us now quote and dissect the statements. Along the dissection, the lies, answers and explanations are titled at the beginning with the first character and a number, like "L01, A01, E01".


"Some planes in the sky leave trails that persist and spread, and other planes, in the same sky, leave short-lived trails, or no trails at all."

A neutral beginning by avoiding the notions #chemtrails and #contrails by using only "trail", and correct description of different behaviors. Here comes our first question.

Why there are two different behaviors, some "persist" and "spread" others not?

A01: Only the condensation trails consisting of vapor in the exhaust are shortened as contrails!

E01: The chemtrails are artificial ice trails, based on industrial chemical nano-dust as condensation cores (nuclei). Without dust the vapor behaves like the vapor already in the air, it cannot build stable crystals. For stable, visible ice crystallization the micro droplets need a surface where they can freeze on. 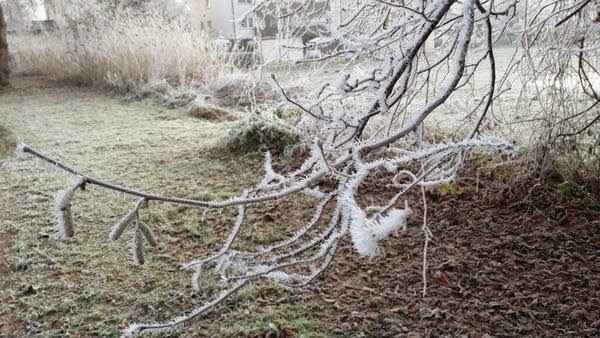 L02: "They are not smoke from the engines, they are formed when the water in jet exhaust (and there’s quite a lot of it, like car exhaust on a cold day) mixes with wet cold air, and condenses and freezes into ice crystals."

A02.1: It is simple exaggeration to tell, "there is a lot of water in the exhaust" without giving a factual data. It depends on the height and temperature. Hot air can contain up to 4% of water vapor, cold air can carry less and with the sinking temperatures the air becomes more dry.

E02.1: In our days all passenger jets use turbofan turbines, which press 90% of the air through the sheath and only 10% comes through burn process in the turbine. The total water share is only 2.8% of the exhaust, 7% is CO2 and 0.2% other gases. The share of sooth is immeasurably low. Therefore the bypass ration is 9:1.

A02.2: Claiming that the air is "wet and cold", which is a half-lie, as no information about the height and temperature is given. The writer reckons with the missing knowledge about meteorology of the reader.

E02.2: The natural condensation begins at ca. 2km and a temperature of 0°C. Therefore this height is also called the CONDENSATION BORDER. Here the Cummuli (fluid condensation clouds) begin to build. 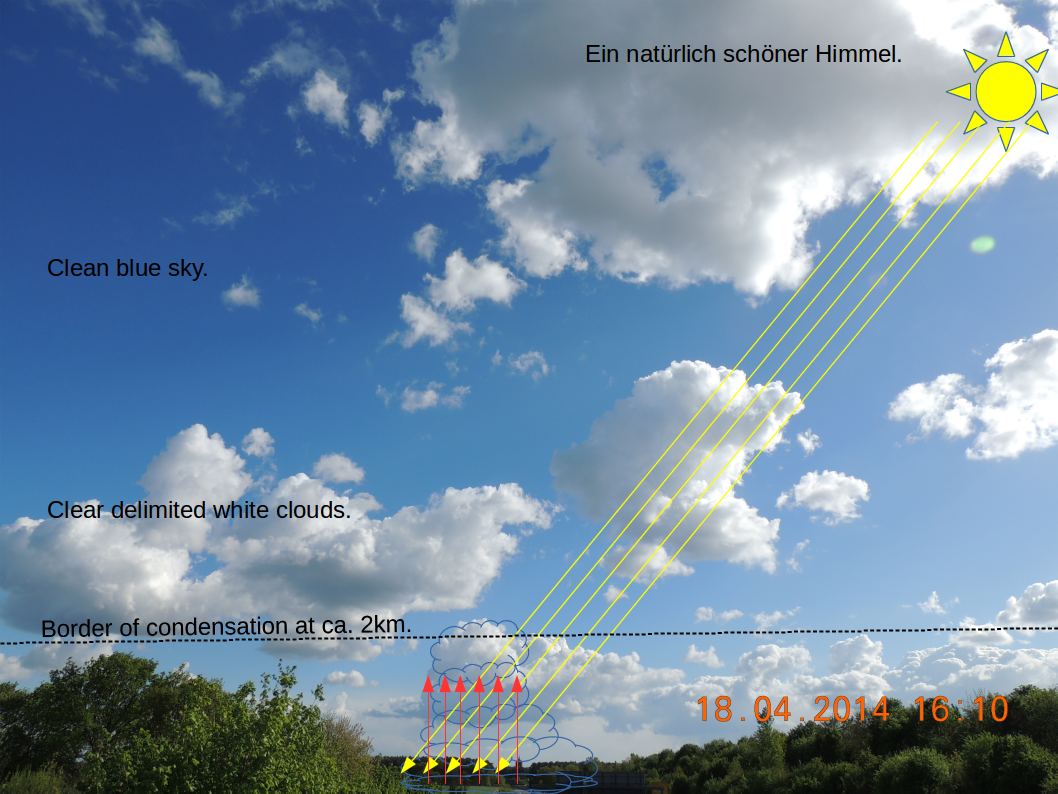 L03: "But this is wrong. Contrails can fade away, and contrails can persist and spread. It depends on the air they are formed in."

A03: Contrails cannot persist, because the vapor cannot crystallize if there is no dust. 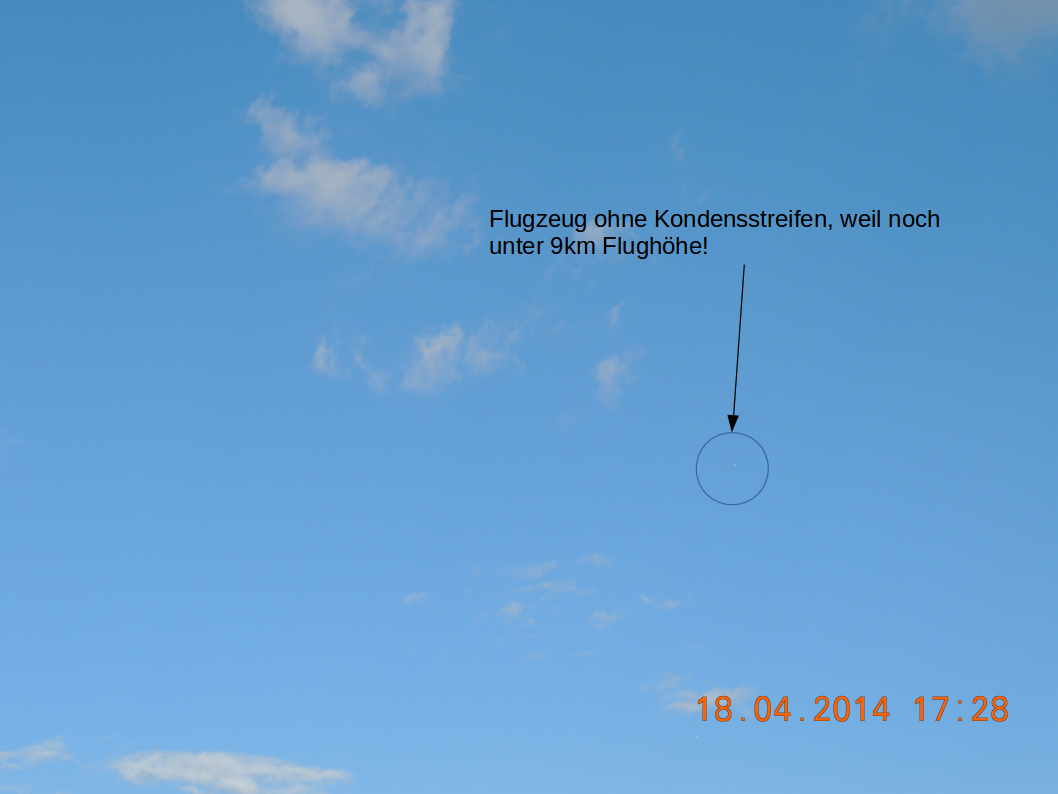 E03: If there was dust, the available water droplets would have already crystallized and had built ice clouds. They would not wait for an airplane to fly through the air package and build long and webbed Cirri . 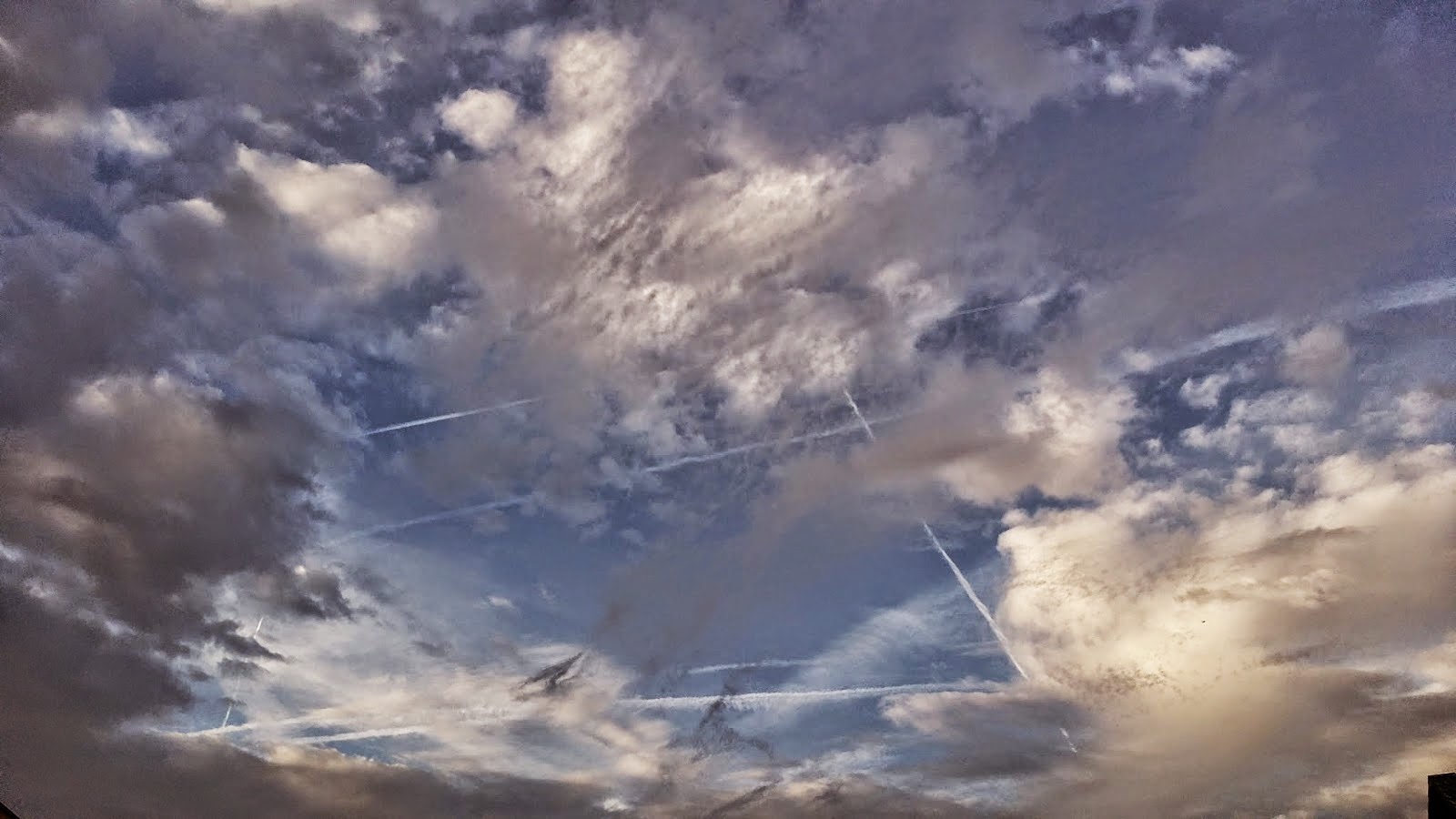 L04: "Now there are two main reasons why some planes leave trails and some nearby planes do not. The less common reason, is that different planes have different engines. Some engines will leave a contrail in air where another engine will not." 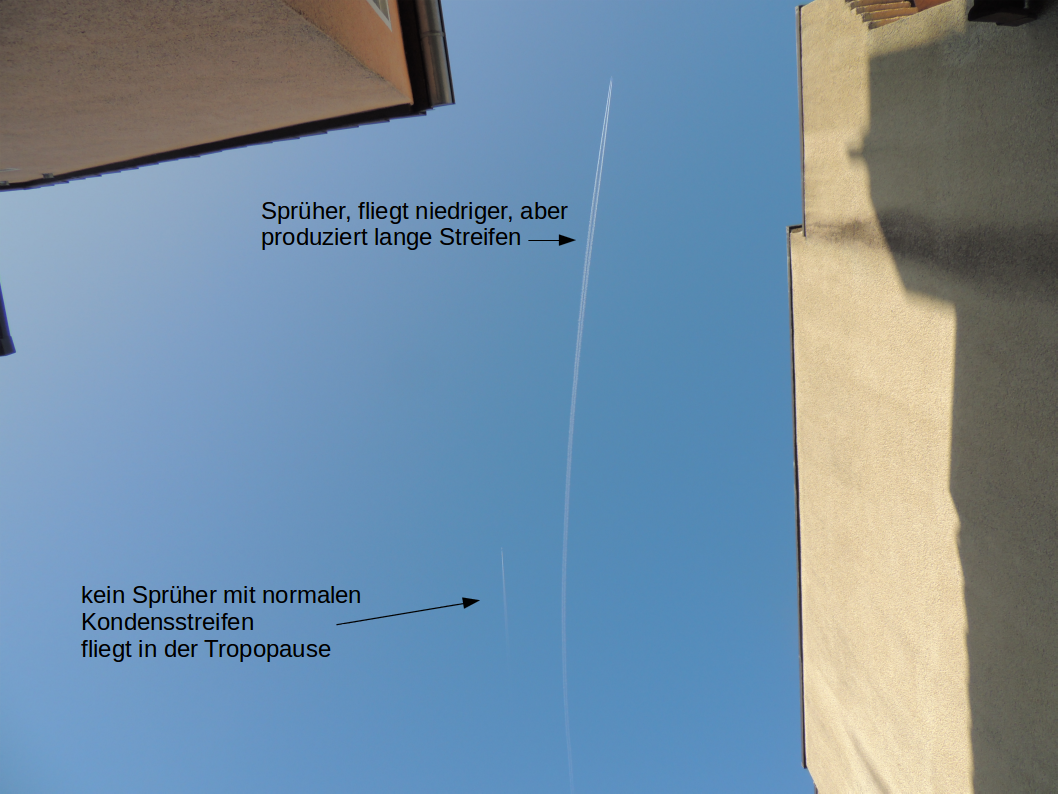 A03: Even if there are different plane producers, they buy the engines from a few producers like RollsRoyce and GE. All current flying commercial planes use turbofan engines.

E03: Newer modern turbo engines are more efficient, press more air through the sheath (90%) and less through the turbine (10% including the burnt kerosene). Therefore the total exhaust is a mixture of 90% dry cold air and only 10% hot air, that the average temperature is lower than 200°C shortly after the turbine in comparison to other turbine technologies.

http://theflyingengineer.com/flightdeck/pw1100g-gtf/
The ration will be improved from 9:1 to 12:1 with the next generation of engines. Then the CO2 share will become 5.38% and the water 2.31%. The engines will cause less noise and shorter contrails.

Better performance (propulsive efficiency) can be achieved by lowering the temperature of the exhaust gas as much as possible while also reducing the exhaust speed so that it is closer to the flight speed. With the aim of reducing the temperature and speed of the turbojet engine exhaust, the turbofan engine was designed to provide a lower average temperature and reduced speed of the exhaust by positioning a large-diameter fan at the front (visible when the engine is viewed from the front) and ejecting (bypassing) some of the air sucked into the engine so it does not pass through the combustor (fig. 1).
The ratio of the bypass airflow (air that does not pass through the combustor) to the core airflow (air that passes through the combustor) is called the bypass ratio. As the bypass ratio increases, the average temperature and speed of the exhaust gas decrease and the propulsive efficiency improves, resulting in better fuel efficiency. Nearly all modern civilian jet civil transport aircraft are equipped with high-bypass turbofan engines."

A05: The A340 with High Bypass is producing less vapor, as more air is bypassed. Where should the "more water" come from?

E05: More bypass means more cold and dry air is turned through the bypass. So the portion of vapor, which produced by burning kerosene sinks in that relation. Because of high bypass of cold air and less hot air, the difference between the common air temperature and the temperature of exhaust, less condensation occurs. Therefore the contrail becomes shorter and begins to emerge at higher altitudes, beginning at ca. 10km and -50°C.
---------------------------------------------

L06: "The planes are at different altitudes.
Yes, it’s really that simple. The reason that one plane makes contrails, or makes contrails that persist, and the other plane does not, is that they are in different regions of air. For simplicity, let’s refer to these regions of air as wet air and dry air, although the differences are a bit more complex.
When the plane is in wet air, it makes a contrail. In dry air it does not."

A06: The contrail is sign of different temperatures between the exhaust and the air region, not the humidity! It doesn't make contrails because it is in wet air. But it can make chemtrails by spraying condensation cores into the wet air with "underfrozen" fluid water droplets.

E06: The humidity is produced by burning kerosene The hot burnt gas contains ca. 28% vapor, which is 2.8% of the total exhaust. This vapor condensates at the cold air and disappears by losing heat and dispersion into the dry air.

The air is dry because cold air can carry less humidity. Water is a natural and one of the lightest components of the air, able to disperse in the Troposphere and Tropopause, according the temperature levels.

L07: "Inside the cloud it’s wet. Outside it’s dry. What’s the difference between inside and outside? It’s a few feet."

A07: This is a very silly claim. The visible cloud is only the top part of a bigger structure full of humidity.

E07: When the sunlight heats up the surface of the earth, hot air takes the vapor with itself, as hot air can carry up to 4% of water. This hot humid air rises up until ca. 2km, where the temperature drops to 0°C or below. Therefore the condensation begins.

This visible condensation is called Cumulus cloud, which is only the visible peak of a huge hot and humid rising air package.  Cumuli are very dynamic. They have a flat concave bottom and a pyramidal rising top side, as long as they are fed by the rising hot and humid air. If enough heated air is rising up, the Cumulus cloud can grow up to the height of ca. 8km-9km from the earth surface.

If fine dust is available the droplets within a Cumulus become more stable and can grow, that they can fall as rain. This natural phenomenon is exploited by an old weather technology, where silver-iodide is sprayed into huge Cumulonimbus clouds to cause a controlled precipitation.

Some additional sources about chemtrails: 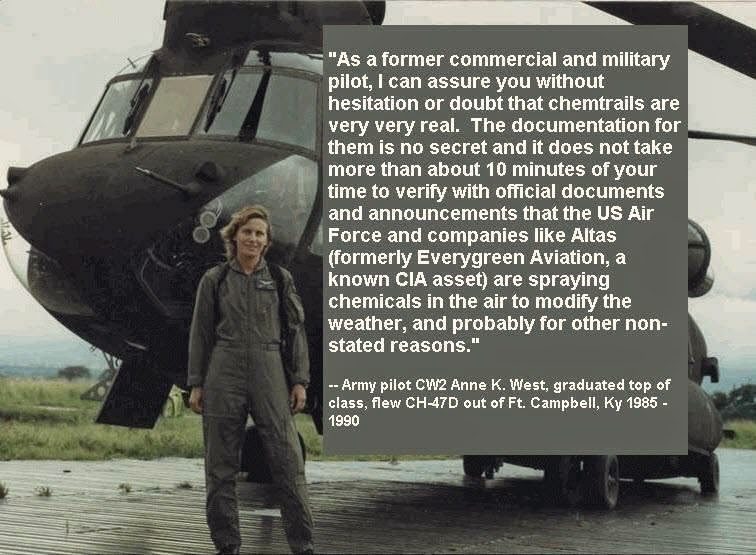