CONTENT
1. Name crime and fraud!
Whatever is presented in the so called "scientific journals" according the norms of academic writing is deemed as "scientific" and no more questioned by the layman and the "scientific community". Particularly if the content feeds the ruling doctrine, no one dares to disagree.

Remember! The ruling doctrine is the doctrine of the rulers!

They blamed the thousands of toxic fume events in passenger jets on leaky pipes, even if it is an technical absurdity. Now, when the poison comes down in a concentrated dose and kills dozens and sickens thousands of people, they name it thunderstorm asthma, publish it in these disgusting journals, by disgusting henchmen and the sheeple are satisfied with that.

Re-own Your language! Don't allow the criminals to occupy the language to brainwash, condition, distract You!

Name an asshole and asshole, not a "womanizer"!
Name an tax evader a thief not a "philantrope"!
Name chemical poisoning as it is, not thunderstorm asthma!
Name medial hiding of crime, not "political correctness"!

The toxic fume in the passenger jets and the killing smog coming down as dirty clouds consists of the same chemical poison!

It doesn't come by natural storms! Also the storms are created to steal the water! Water is managed all over the world now!

We are in the midst of WWIII and it is the War on Water, brought to You from the same cocaine and meth junky Hollywood script writers, who designed the War on Terror! We have global terror war on everything now, on sunlight, air, soil, water, food, culture and nature!

The perpetrators of this global genocide apologize themselves by blaming everything on a magical "positive feedback", "greenhouse effect and global warming by CO2" and "climate change". If liars are in a dead end, they babble about "Your energy security", but what they create is global insecurity!

The criminals expect from us to feel sinful, "adapt" to the "climate change", behave "sustainable", "ecological" and pay a global air tax for "saving the climate"!

Storms don't bring poison, if no one has put poison into the air.

Pollen doesn't fly into the storm, is cracked and comes down as poison!
Don't be dumb to believe such a lie story!

This crime feeds itself from Your dumbness!
Wake up and think! Only by thinking, You prove to be a human! 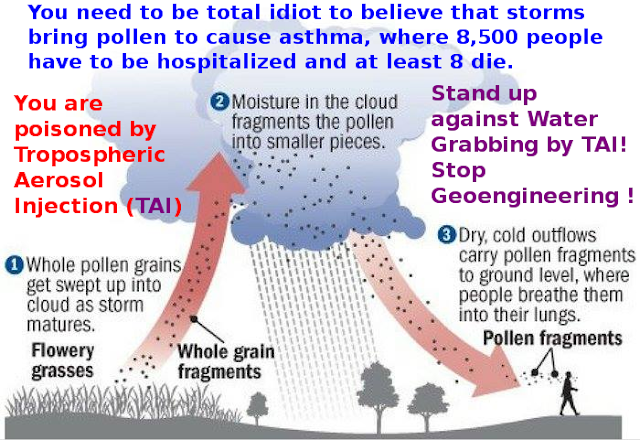 I agree, it is not easy to understand and the global humanity is brainwashed by a propaganda machinery of the geoengineering-lobby, but You have no other choice.

You have to think in all physical dimensions and across all scientific disciplines.

They use the "trans-disciplinary" knowledge to manipulate You, because they know what You don't know!
Your missing intelligence is the main asset of fraudsters!


3. Read the propaganda with a critical mind!

A trans-disciplinary overview of case reports of thunderstorm-related asthma outbreaks and relapse
http://err.ersjournals.com/content/21/124/82

Consider that "pollen allergy" is implemented here for distraction! The mass poisoning events had nothing to do with flying pollen, but they don't talk about real poisoning material, they prefer to tell You in fancy, authority suggesting blabla about the pollen allergy!

An Overview of Thunderstorm-Associated Asthma Outbreak in Southwest of Iran
https://www.hindawi.com/journals/jeph/2014/504017/
"... following the occurrence of a thunderstorm on November 2, 2013. A total of 2000 patients presenting with asthma attacks triggered by thunderstorm were interviewed and an initial questionnaire was completed for each individual."

"After twenty days, patients were asked to complete a supplementary questionnaire, but only 800 of them accepted to do so. The majority of subjects was aged 20–40 years (60.5%) and had no history of asthma in most cases (60.0%). The symptoms had started outdoors for 60.0% of the participants."

Please consider, that Iran is under attack since many years!

"Thunderstorm asthma epidemics have been reported in various countries including Australia (Melbourne), England (Birmingham and London), Saudi Arabia, Italy, the U.S., and Canada."

THUNDERSTORM-ASSOCIATED BRONCHIAL ASTHMA: A FORGOTTEN BUT VERY PRESENT EPIDEMIC
https://www.ncbi.nlm.nih.gov/pmc/articles/PMC3410145/
"The trigger for this review was the TAA epidemic in November 2002, Eastern Saudi Arabia."
"The prevalence of bronchial asthma is increasing and its etiology remains obscure, but acute episodes have been associated with specific etiologic factors. These include air pollutants such as ozone, nitrogen dioxide, sulfur dioxide and other chemicals, as well as particulate matter of respirable diameter (e.g. fog, organic dust, and aero-biological products). It is difficult to standardize “measures of exposure”."

Insider knowledge about the CIA! https://geoarchitektur.blogspot.com/p/insider-knowledge-about-cia.html