The dealer with the oldest tomatoes is the loudest on the market place!

Why is the Geoengineering Mafia so stressing on the RISE of CO2 level. Why should it be important talk about slight share variation of a trace gas, with only 0.037% in the atmosphere. 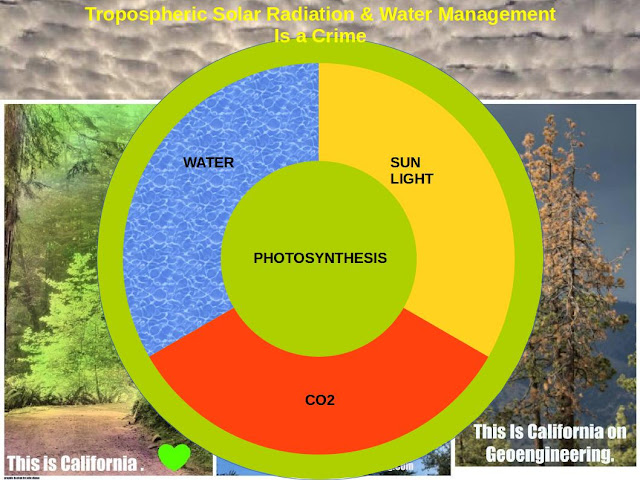 Obviously the Geoengineering Mafia is struggling to distract from its crime. It is trying to mind-control by fake-science and NLP, just to hide the theft of tropospheric water, sunlight, air & soil.

Disclosing their method and exposing their scam is not so difficult. Their main tool of Geoengineering Lobby is the steady repetition of the propaganda lies by their presstitutes, maulhuren & scientiputas! Whatever they do, lies cannot replace the truth!
In order to be able to live and grow, a plant has to photosynthesize and for this it needs
If one of these three requirements is missing, photosynthesis stops. The mineral nutritional additives are absorbed from the soil with the water. 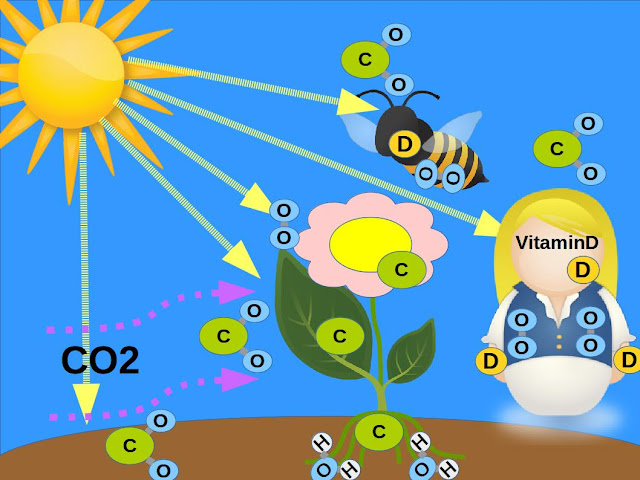 The blocking of sunlight for Tropospheric Solar Radiation & Water Management reduces the photosynthesis activity of plants, which results in the increase of CO2 level and means the decrease of O2 level.
As a result, we have less oxygen to breathe because of climate control activities. That should be clear and simple to understand! Why don't we get upset about the drop in oxygen levels?
The lies about CO2 distract from their crimes and help to put the blame onto the victims. 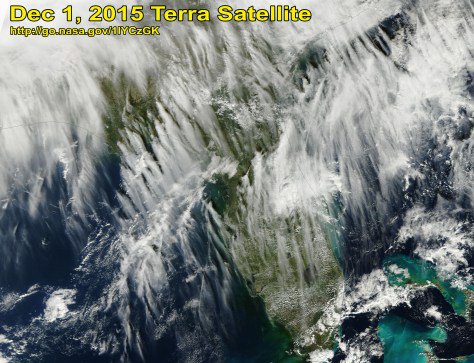 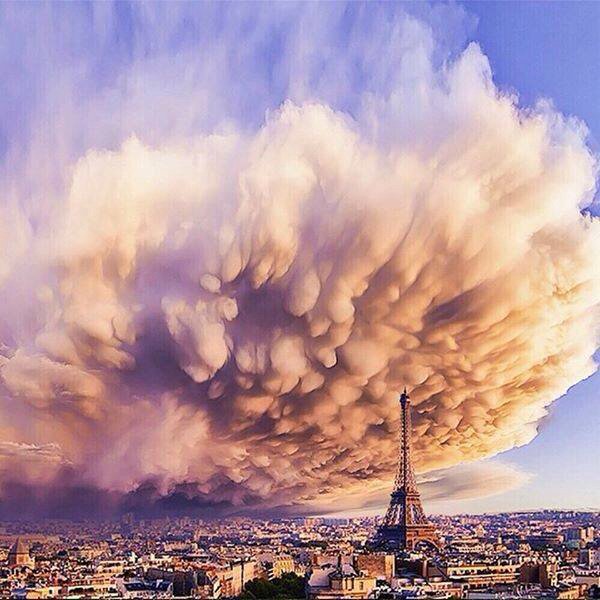 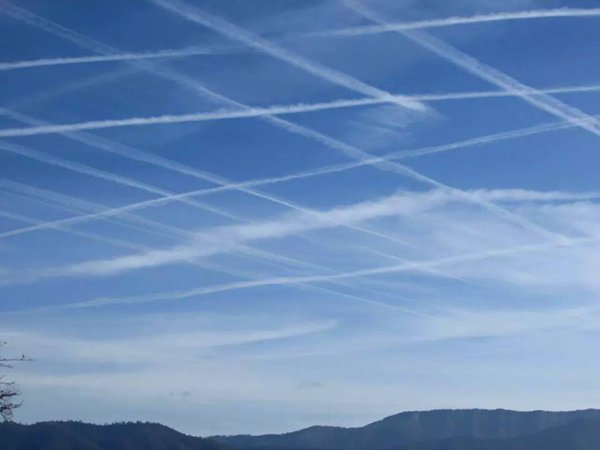 As soon as the criminals are stopped polluting our sky the CO2 and fine dust level will sink to natural levels! The sky will become blue, the clouds white and the air and water fresh and healthy and the weather natural again.

If we are equipped with the background knowledge about Climate Geoengineering, the Scientiputas who write their propaganda "studies" for the Geoengineering Mafia, brazenly admit and threaten to kill plants, represented here by the dying conifers!

Scientists say climate change could cause a ‘massive’ tree die-off in the U.S. Southwest
https://www.washingtonpost.com/news/energy-environment/wp/2015/12/21/scientists-say-climate-change-could-cause-a-massive-tree-die-off-in-the-southwest/ 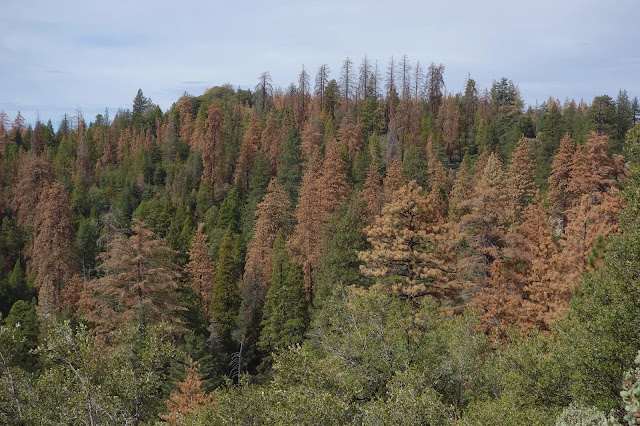 Less visible is the diseases on flora and fauna, caused by missing sunlight !

Our skin cannot produce VitaminD under these polluted skies, by SRM dust.

"In the summer months, the CO2 typically decreases during sunny, warm days as photosynthesis removes CO2 from the air. At night, the CO2 increases because the plants are giving off CO2 in respiration. It can take until late morning before CO2 removal by photosynthesis becomes apparent. Local CO2 levels also change with wind direction."

THE GREENHOUSE EFFECT HAS NEVER EXISTED AND WILL NEVER EXIST! IT IS A LIE!
https://geoarchitektur.blogspot.com/p/the-greenhouse-effect-has-never-existed.html

"The benefits of carbon dioxide supplementation on plant growth and production within the greenhouse environment have been well understood for many years."

"For the majority of greenhouse crops, net photosynthesis increases as CO2 levels increase from 340–1,000 ppm (parts per million). Most crops show that for any given level of photosynthetically active radiation (PAR), increasing the CO2level to 1,000 ppm will increase the photosynthesis by about 50% over ambient CO2 levels. For some crops the economics may not warrant supplementing to 1,000 ppm CO2 at low light levels."

Following paper is really worth reading, as it deconstructs all propaganda of Geoengineering Mafia about CO2 within a single page.

"Carbon Dioxide is an odorless gas which makes up about 300 ppm of our atmosphere, yet dried plant material contains an average of 40% carbon which comes entirely from CO2. Therefore we need to consider CO2 to be a major plant nutrient, one that affects growth rate, yield and one that needs to be supplied in adequate quantities if crop growth is going to be maximized."
"The main plant process a grower needs to consider is 'photosynthesis' as this is what drives growth, development and production. Photosynthesis is a reaction with occurs within the leaf tissue and requires light of the correct wavelength, water and carbon dioxide to produce assimilates (sugars) which are used for growth and development. As a by-product oxygen is released into the environment. When artificial lights are used to grow plants, the aim is to provide just the right intensity and wavelengths for optimal photosynthesis."

Does the Geoengineering Mafia want to kill all plants by propagating "decarbonization" of the air? Are its priests crazy genocidal killers or are they just idiots?

"Hydroponic plants also usually have more than sufficient water and nutrients, so the limiting factor in the process of photosynthesis in an enclosed environment, then becomes the availability of carbon dioxide (CO2). In a well sealed growing environment situation, CO2, under good lighting, begins to limit photosynthesis very rapidly. Since ambient CO2 levels in the air are around 360 ppm, which is relatively low, this can be used up by even a small population of actively photosynthesizing plants within a couple of hours. In fact CO2 can drop away to only a few ppm in well sealed growing environment and when this happens, if the CO2 is not replaced, photosynthesis and plant growth stops."


Plants under direct sunlight use the blue waves, the ones under half shade the red waves of light for photosynthesis. The fine dust and the resulting aerosol clouds used for SRM are reducing the share of blue rays dramatically and that kills the trees.

From German: Photosynthesis-Factor Color of Light
http://www.u-helmich.de/bio/stoffwechsel/reihe4/reihe41/413-Licht/IndexLichtfarbe.html
"Why does photosynthesis work particularly well in blue light?

The blue component in sunlight is particularly high, higher than the red, green or yellow component. You don't see that in the spectrum, you have to find out with sensitive measuring devices. In any case, that's why photosynthesis works particularly well in blue light."
"Why does photosynthesis also work in red light?

To do this, one must not only look at the spectral composition of sunlight, where the blue component clearly predominates, but also has to examine how the light is composed in the shade, in which many plants have to live. And here it turns out that shadow light contains a fairly high proportion of red.

Plants with chlorophyll, which absorbs blue AND red and chemically utilizes it, have a clear survival advantage over plants whose chlorophyll only absorbs blue light. They can conduct photosynthesis both in the sun and in the shade. For this reason, over the course of millions of years, such plants have prevailed over plants without red absorption."

Following article tries to distract from the crime of Geoengineering SRM, by brazenly blaming it on man made CO2! 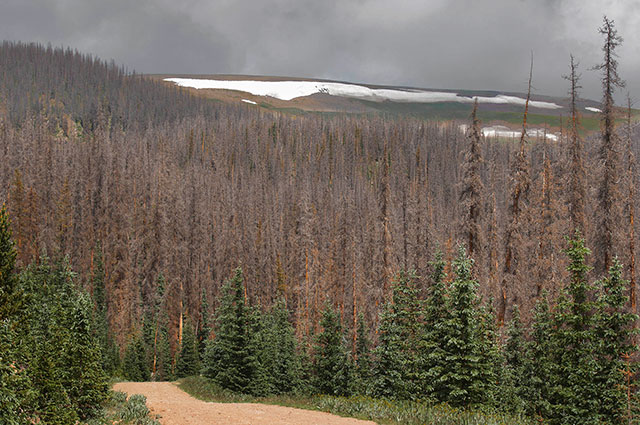 Is Tropsopheric Solar Radiation and Water Management for Nuclear Fracturing of Oil and Gas and Industrial Desert Farming worth that damage on the nature and the people?

Theft of water and sunlight is weakening and killing all living creatures. Replacing the wording from "climate change" to "climate control" makes everything clear.

Ecological Drought Across the Country: Understanding the Impacts Region by Region
https://nccwsc.usgs.gov/content/ecological-drought-across-country-understanding-impacts-region-region 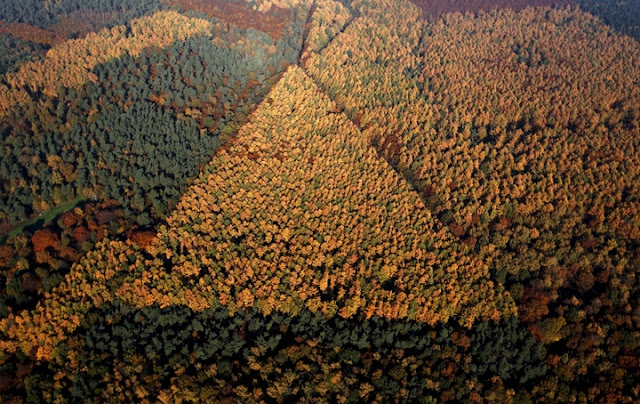 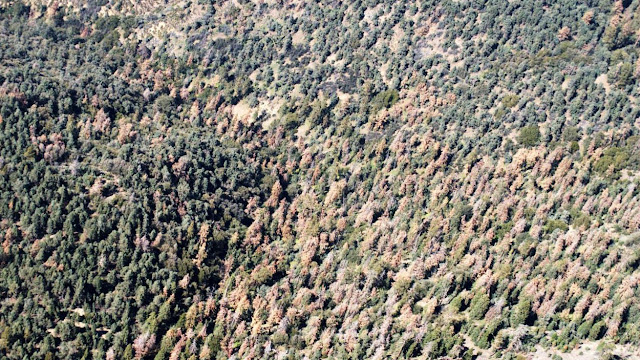