1. How the Chemtrails Lift works!

There are specific altitudes, which should be remembered observing the the sky and the clouds. The examples here are based on the conditions and height within the Temperate Climate Zone, which applies for the most part of USA and Europe.
Please look at this small animation and observe the skies by Yourself. You will find all indications, listed and shown in this and other articles about SRM (Solar Radiation Management) for climate control.
The lifting and binding of the water masses takes place with the so-called Pinatubo-Effect, which is the artificial imitation of a volcanic eruption with a high proportion of fine dust, mainly consisting of white asbestos, fly ash and sulfur powder. What is formed is nothing more than highly toxic smog, not near the ground, but at heights of around 5 to 13 kilometres.

Here You see how the separate levels of the SRM covers actually look during implementation. The lower cover is already saturated with humidity, builds flat Stratus like clouds and above the next SRM cover, currently webbed with fresh chemtrails. 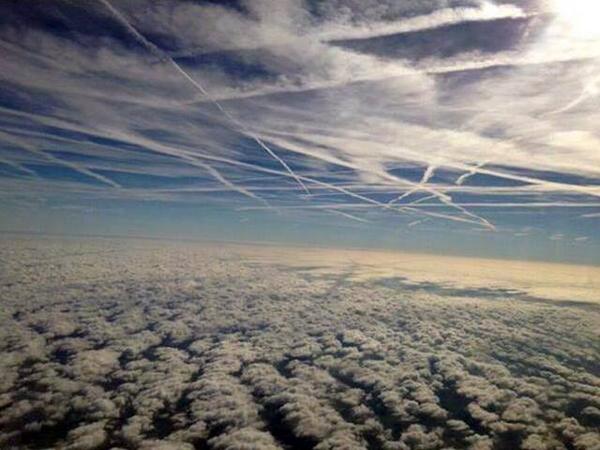 Following historic pictures were not taken intentionally. A friend detected them in his archive, when we began talking about chemtrails.


Do You have also historic pictures with or without chemtrails? The SRM chemtrails project begins, according to current knowledge in the year 1996.

First experiences with toxic fumes have been reported 1998. Do You know earlier and more cases?

Before 1996 no chemtrails should have been known in the sky, at least before 1990 nothing of that scale in Europe, apart from major events where local rain would have been prevented.

In the USA, large areas of airspace were "managed" as early as the 1950s, but certainly from 1960 on. The official start of systematic climate control was in the same year.


Rediscover Your memory about the clean sky , keep up awareness!

You may ignore the other content of following films, observe only the sky with clouds!

Chemtrails are only visible if the color effects are part of the air show!


No being without consciousness!

Please read other articles on this blog to learn about all of the described aspects of geophysical warfare and commercial climate control.
Don't allow to be conditioned!
http://geoarchitektur.blogspot.com/p/conditioning-srm-chemtrails.html

The "veil clouds" and "high fog" are triggered by deliberately applied fine dust!

Chemtrails are made with coal ash & other industrial trash, used as desublimation nuclei!
http://geoarchitektur.blogspot.com/p/coal-fly-ash-flugasche.html

That is the physical mechanism behind it!

Sublimation and desublimation! Knowledge is power, ignorance makes you desperate!