To be clear that nothing like greenhouse effect exists or existed anywhere in the World or the Universe! Everything about warming by a greenhouse effect is framed like science, but consist of marketing lies to promote Climate Geoengineering, or let us be more precise to cover the criminal doings of the Climate Control corporations, military and oil industry!

Based on that, also greenhouse gases don't exist. None of the gases which are framed as such, are physically able to have such an impact. In contrast all these gases (H2O, CO2, CH4) have a cooling effect in the atmosphere.

If You want to learn more about background of the greenhouse effect lie, please read first the following article.

The Greenhouse Effect never existed and will never exist! It is a blatant lie!
https://geoarchitektur.blogspot.com/p/the-greenhouse-effect-never-existed-and.html

Globalwarming propagandists are desperately trying to grow methane (CH4) as a second "villain" gas! Do You know the difference between CO2 and CH4? They are totally different, as reason and result!

CH4 consists of 1 Carbon and 4 Hydrogen atoms. It is one of the best available energy sources. CH4 is very reactive in contact with O2 and sunlight, that it oxidates within hours after emission into the air. When CH4 is burned (oxidated with O2) the results are CO2 and H2O!

So CH4 is the energy source and CO2 is the gaseous ash of burned CH4! 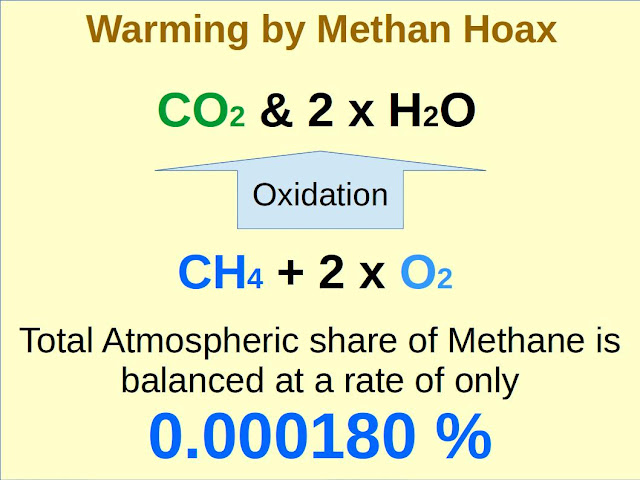 If You would compare it with burning wood, wood would be CH4 and the remaining ashes and sooth would be CO2 and H2O. To be more correct, actually the main results of burned wood are also CO2 and H2O.

How can CH4 have the same effect like CO2 and H2O?

How can wood be the same like its ashes?

Why? Look at the total share of methane in the Atmosphere!

CH4 is a better heat absorber than H2O (water vapor) but it does't survive for long and turns into H2O and CO2.

But CH4 is less absorbing the sunlight spectrum than any other gas in the air. Its absorption ability is limited to a small fraction of infrared waves. 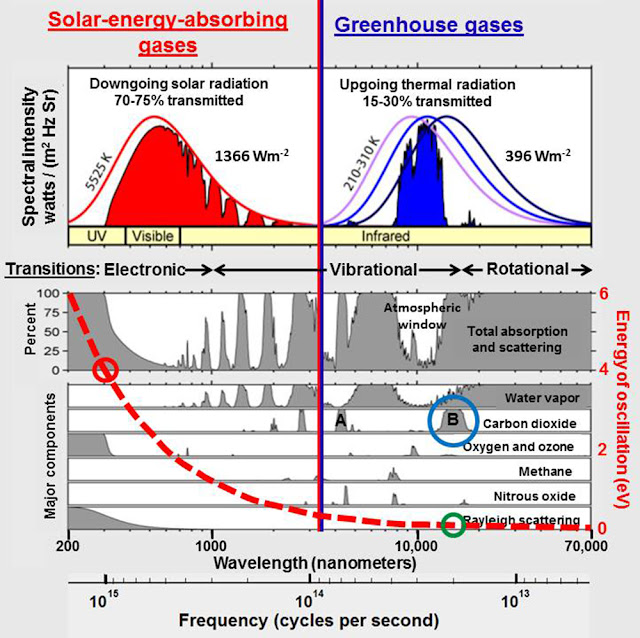 Geoengineering propagandists not other choice but to lie, because they are profiting from these lies. However they are brazen enough to demand from us to adapt to their crimes and pay for it and bear the collateral damage of Tropospheric Sunlight Robbery Menace (SRM) and Water Theft !

Before explaining more about permafrost, I want to make clear, that permafrost is not melting and releasing huge amounts of methane. First it must be clear that permafrost mainly consists of earth, sand, stones and water. The amount of CH4 is lower than 100 µmol in 1 mol permafrost. That means 100 from 6 Million parts of molecules! This only about 0.00001667%. So we are talking about variations of nothing!

Micromoles to moles conversion and definitionhttps://www.waveformlighting.com/horticulture/micromoles-to-moles-conversion-and-definition

"The mole (symbol: mol) is the unit of measurement for amount of substance in the International System of Units (SI). It is defined as exactly 6.02214076×1023 constitutive particles, which may be atoms, molecules, ions, or electrons."

As an impact of global climate control, also permafrost areas may change shift more rapidly, like artificial extreme storms are formed and heavy precipitation is shifted to the areas of water delivery.

In and on the oceans or on land, under very cold conditions CH4 binds with H2O to build methane hydrate, which is the main reason for Siberia being a breeding ground for natural gas. Because of some other wealth and this eternal natural gas fabrication, the historic empires of Europe had and the global empire has always the ambition to divide and destroy Russia and conquer the treasures of Siberia.

Russia knows that since centuries and it is always happy to sell its resources to its enemies to make them pay for its security.

"Methane clathrate (CH4·5.75H2O) or (4CH4·23H2O), also called methane hydrate, hydromethane, methane ice, fire ice, natural gas hydrate, or gas hydrate, is a solid clathrate compound (more specifically, a clathrate hydrate) in which a large amount of methane is trapped within a crystal structure of water, forming a solid similar to ice.[1][2][3] Originally thought to occur only in the outer regions of the Solar System, where temperatures are low and water ice is common, significant deposits of methane clathrate have been found under sediments on the ocean floors of the Earth."

"Methane clathrates are common constituents of the shallow marine geosphere and they occur in deep sedimentary structures and form outcrops on the ocean floor. Methane hydrates are believed to form by the precipitation or crystallisation of methane migrating from deep along geological faults."

"In geology, permafrost is ground,[1] including rock or (cryotic) soil, with a temperature that remains at or below the freezing point of water 0 °C (32 °F) for two or more years.[2] Most permafrost is located in high latitudes (in and around the Arctic and Antarctic regions), but at lower latitudes alpine permafrost occurs at higher elevations. Ground ice is not always present, as may be in the case of non-porous bedrock, but it frequently occurs, and it may be in amounts exceeding the potential hydraulic saturation of the ground material. Permafrost accounts for 0.022% of total water on Earth,[3] and the permafrost region covers 24% of exposed land in the Northern Hemisphere.[4] It also occurs subsea on the continental shelvesof the continents surrounding the Arctic Ocean, portions of which were exposed during the last glacial period."

The methane level in the atmosphere is in balance, because when the geoengineering industry creates the heat waves by building ozone holes above the ice bergs, ice caps and glaciers more water is evaporated and also some methane is released, but the more intensive UVB radiation accelerates the oxidation of methane and formation of CO2 and H2O.

If it is not destroyed in the troposphere, methane will last approximately 120 years before it is eventually destroyed in Earth's next atmospheric layer: the stratosphere. Destruction in the stratosphere occurs the same way that it does in the troposphere: methane is oxidized to produce carbon dioxide and water vapor. Based on balloon-borne measurements since 1978, the abundance of stratospheric methane has increased by 13.4%±3.6% between 1978 and 2003."

3. Perls of dumbness for the sheeple!

If it was not the reality of our times, I would like to lough about such idiocy! :-) :-)
As they are seriously criminal, I have some serious question for them.

So what? Kill the cows and stop rice production and starve the people?
Would the methane from natural meadows and animals be more preferable?
Would this methane have other chemical and physical properties?

How can methane "surge" when it turns into mater and carbon dioxide under sunlight?  :-) Doesn't methane indicate also life activity? Should we stop life, just to eliminate methane "surge"? Should we also finish life in the oceans, because most methane comes from there?

Methane Emissions Are On The Rise. That's A Big Problem.
http://topnews.one/index.php?newsid=20068

Isn't the biggest problem of our times is the bad education level of the masses and particularly of the deemed educated ones?

I hate the word "study", because it is so often abused by this crime gang. Why don't they call their blurb of propaganda "shit papers"?

Should we stop food production? What should we eat instead of food?

Methane Emissions Are Soaring, Report Finds, and Agriculture Is to Blame http://www.commondreams.org/news/2016/12/12/methane-emissions-are-soaring-report-finds-and-agriculture-blame

Is there a way non-agricultural food production?
Which value may a 10% or 30% of nearly nothing have on anything?

Isn't the "extreme cold" not binding methane together with water and doesn't it compensate the "extreme warm" releasing water and methane as vapor?
Isn't methane turning into water and carbon dioxide, if it is really hot?

Add comment
Load more...
Home
Subscribe to: Posts (Atom)
QUESTION YOUR KNOWLEDGE, CLOSE YOUR GAPS !!
I am suspended on twitter and blocked on fakebook! So don't miss me there.
Also admins of some Diaspora pods are limiting my activity against ClimateControl. Most are not employed to act as censors, they are MindControlled by NLP.
You feel Your chains when You move! ClimateControl Mafia is desperate!